The Friends' AGM in the village hall was followed by a sell out talk by award winning garden designer Mandy Buckland. The audience got a glimpse into the world of professional garden planning and went home with valuable tips for creating exciting displays. We were pleased the evening was so enjoyable and wish to thank Mandy, everyone who attended - and firms that donated raffle prizes including Holt Garden Centre, Sarah Raven and Edgefield Nurseries.
November2021 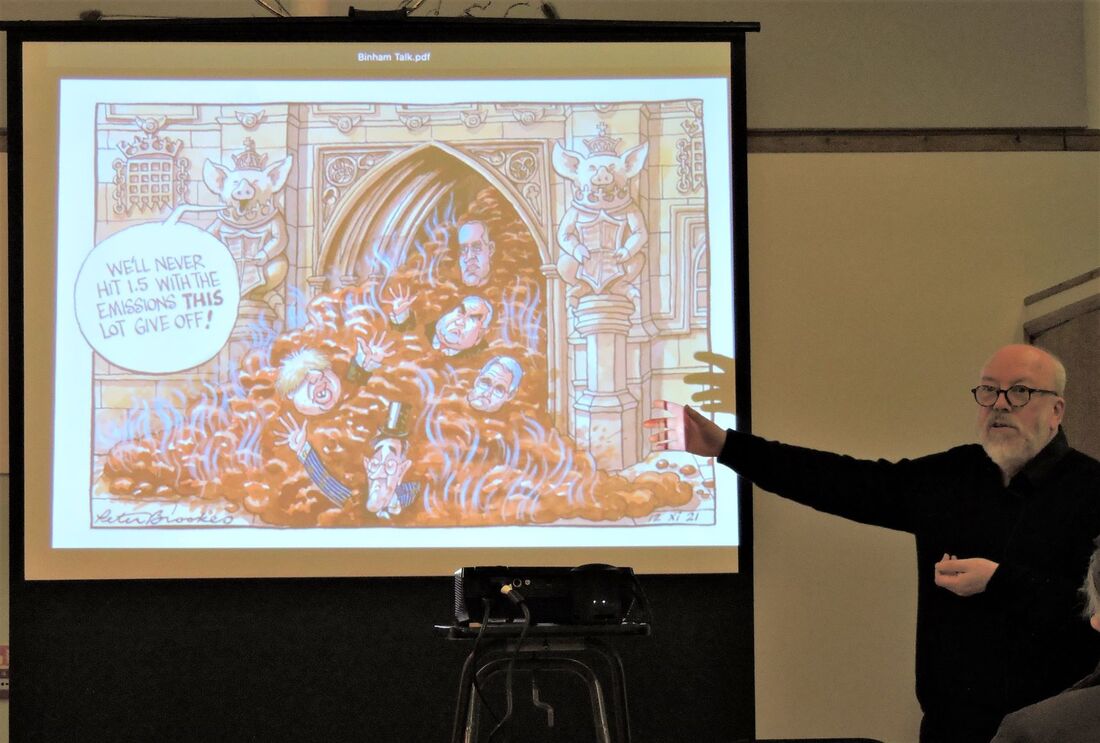 Our much looked forward to talk by Peter Brookes finally took place at the end of November, a year later than originally planned. Peter, political cartoonist for The Times, delighted his sell-out audience with stories about his amazing and prolific cartoons and work entwined in politics.
We were sorry that we had to restrict numbers but were very happy with the enjoyable evening and the funds we raised to help the Binham Priory Church building.
A big thank-you goes to the Maltings Theatre at Wells for our raffle prize for the night.
September 2021
We celebrated the 10th anniversary of the Friends of Binham Priory with a party in the church. It was 18 months late and a happy get-together ... a chance to catch up with everyone's news. Our chairman, Clive Brady, spoke of projects accomplished over the years. He paid tribute to our loyal members, our past and present committees and the
support of Liz Brown from the village hall, William and Alex Wales from the farm and Sarah Day from our village pub, The Chequers. Some pictures from the evening can be seen below.
​
​March 2021

​Due to Covid19 contact restrictions, The 11th Annual General Meeting of the Friends of Binham Priory was held electronically, via Zoom, after consultation with our membership.
All committee members were present and were re-elected to office.
After formal business, Chair Clive Brady said he hoped that events postponed in 2020 would take place in the year ahead.

Much loved colleague, Tony Pepper, decided to call it a day after five years service to our FoBP committee. Tony, well known in the village as a Priory tour guide, and past organiser of Binham Christmas Fair, was presented with a special mug from his friends on the committee. It was suitably inscribed with the words "You're a Star". 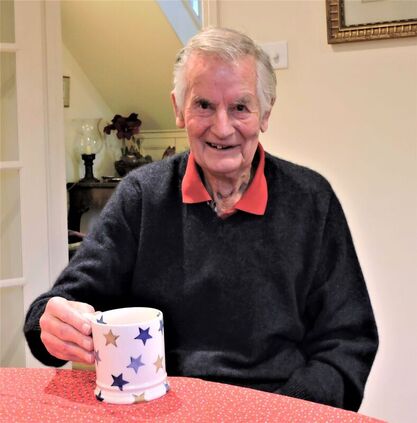 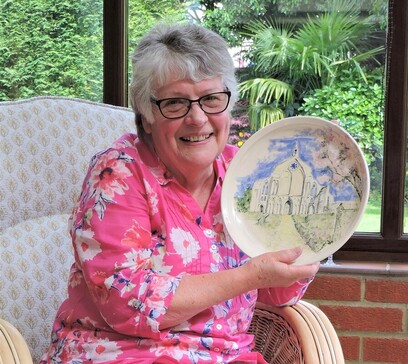 We said farewell to our lovely treasurer Hilary Brown who had been with the Friends of Binham Priory since it began. A valued member of our little committee, Hilary left the area for adventures new closer to her family.  Fellow committee members took great pleasure in personally presenting her with a special memento and look forward to seeing her again as a visitor at future events.
​Our new treasurer is John Surrey.


​March 2020
We entered our tenth anniversary year in celebratory style with an evening with Black Shuck Gin. It was exactly ten years to the day - back on March 12th 2010 - that the Friends of Binham Priory conducted their inaugural meeting. We marked the milestone with a fundraiser with Black Shuck.
​Their talk … and tasters … went down well ! 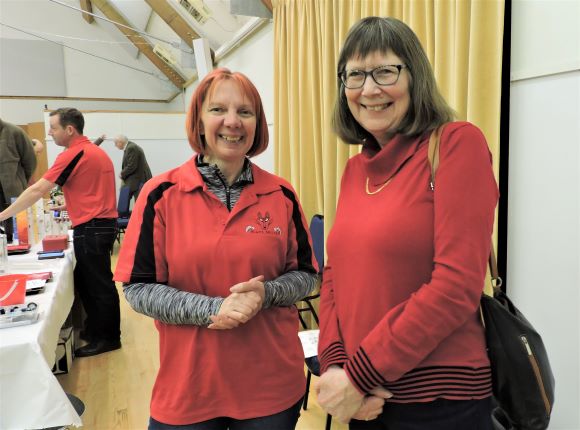 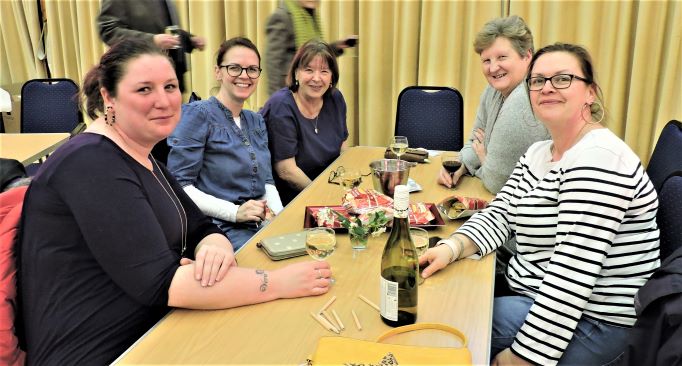 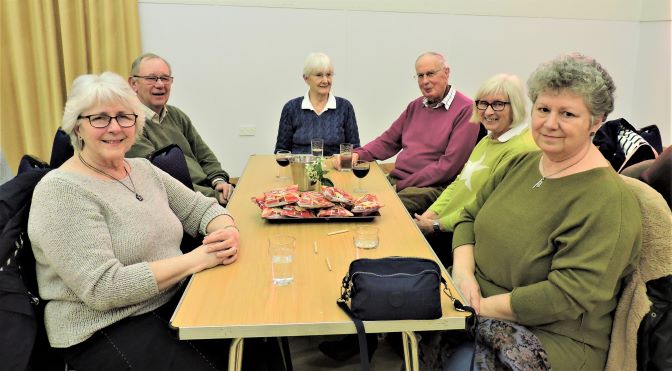 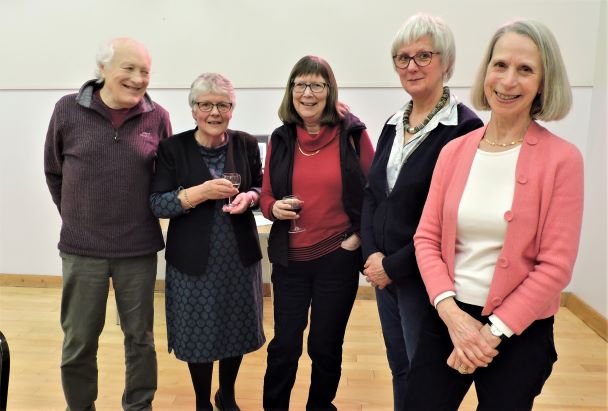 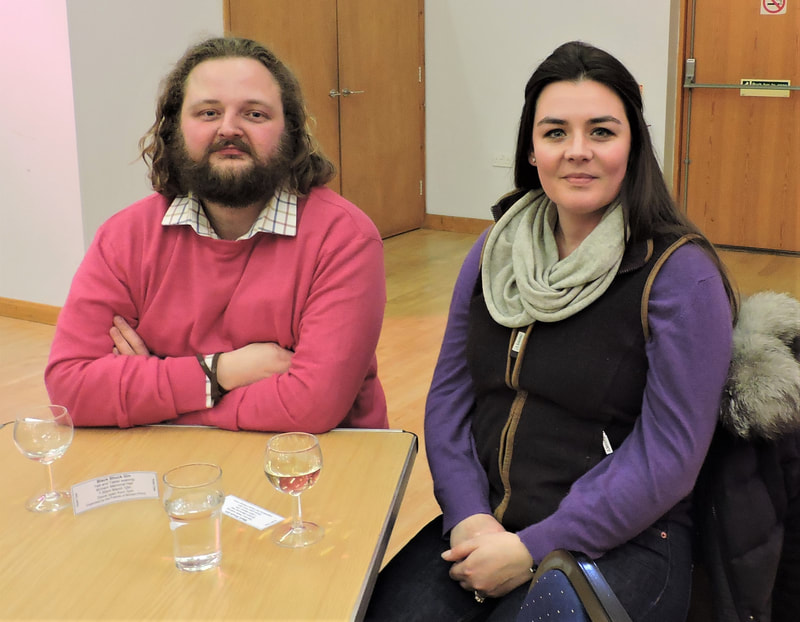 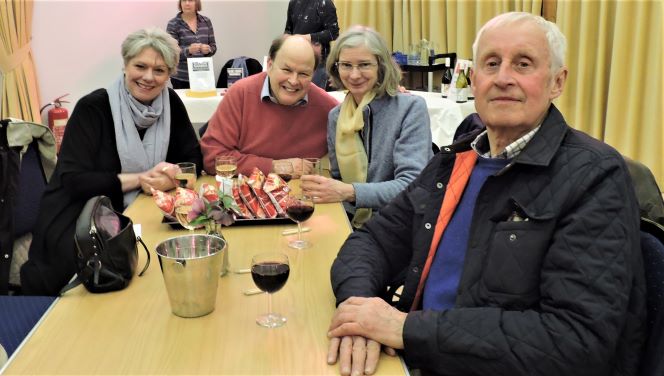 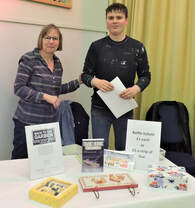 We thank our members for their support over the years and everyone who attended our AGM and talk.
Our thanks also go to local companies for their
​generous raffle prizes,
​ Mr C's and Arthur Howell of Staithe Street, Wells,
and Back to the Garden, Letheringsett.
​
​

​Leading cartoonist Annie Tempest, creator of Tottering By Gently in Country Life magazine, was a big hit at our Autumn talk.
Her presentation … Tottering Through Life ... captivated our packed audience.  It was moving, amusing and totally fascinating from start to finish.
The event was another sell out success. Thank-you Annie and thank-you to everyone who attended...also to those who worked to make it happen and those who donated raffle prizes, including Annie herself and Boden Clothing. 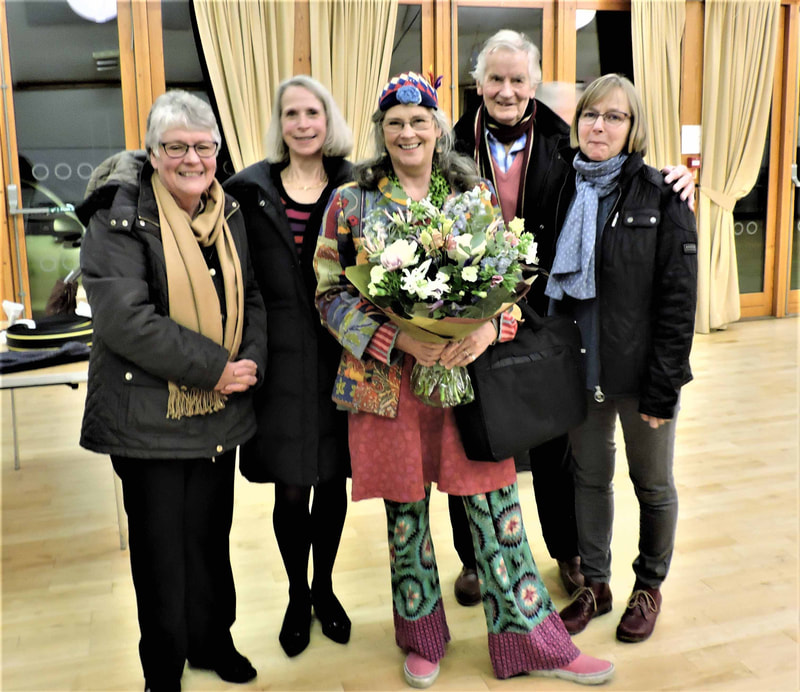 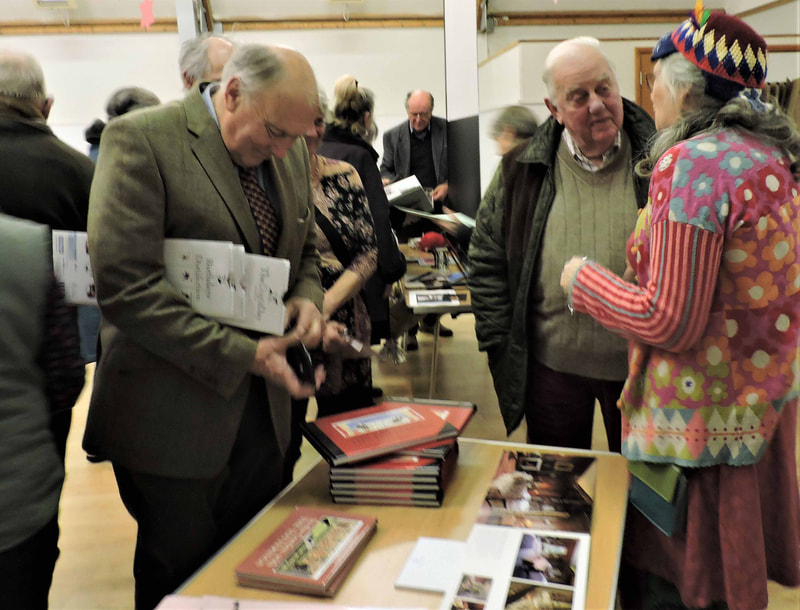 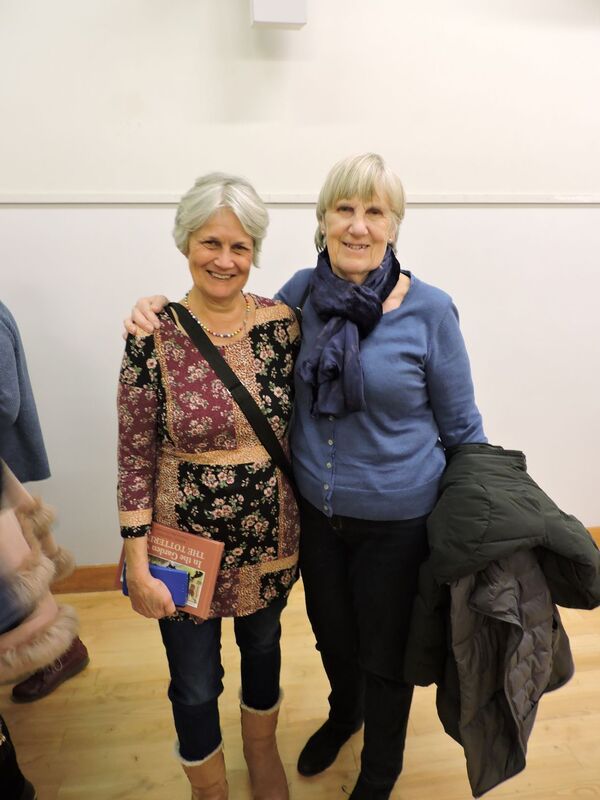 ​PICNIC 2 JAZZ JULY 2019
​Weather didn't matter at
​ Picnic 2 Jazz 2019.
​Revellers brought their own special sunshine to our annual outdoor extravaganza in the fabulous Priory grounds.
As always … we convey a very big thank-you to all who helped make the event so successful, from the car park support and DixieMix band to the Chequers pub box office and everyone who bought tickets to attend.

Speaker David Reeve had his audience in stitches recalling
​some of his embarrassing moments at work as Royal Protection Officer. David, a former Chief Superintendent of Police who headed the Royal Protection Department at Sandringham before retirement, delighted a packed Binham Memorial Hall with a look at the serious and the funny side of his important and demanding role.
The event was a sell out success and the Friends send a big thank-you to David
and to everyone who bought a ticket.
Our thanks also go to Peter Beales Roses who donated a rose voucher for the raffle.
​ 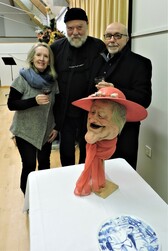 DECEMBER 2019
​From small cartoons to giant pots – with a generous helping of satire in between. The story of Roger Law’s career in art made fascinating listening at our pre-Christmas fundraiser.
Roger, ceramicist, caricaturist and co-creator of the controversial TV show Spitting Image, talked his audience through an amazing life which took him from the Fens to London, Australia, China then back to settle in Norfolk. Laced with a good helping of humour it made a great night out.
The event, in Binham Memorial Hall, also featured a display of some of Roger’s creative pieces, including a Queen Mother puppet head from Spitting Image, beautiful bowls, prints and Spitting Image mugs.  We had a really good turn out and we would like to offer a big thank-you to Roger. We also thank everyone who bought tickets and all those who gave time to help make the evening run smoothly. 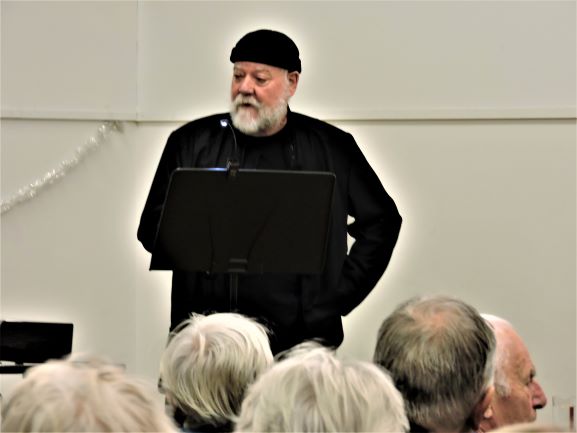 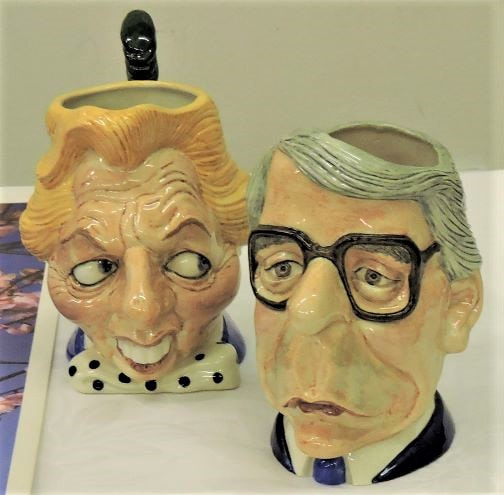 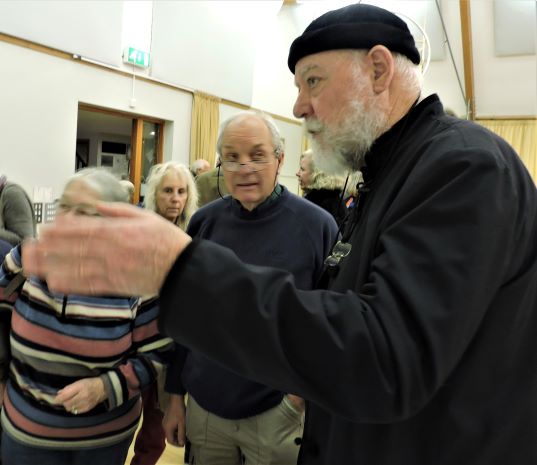 JULY 2018
It was sunshine and smiles all the way at our 2018 Picnic to Jazz.
More than 250 people joined the fun in Binham Priory's beautiful monastic ruins. On a scorching hot July afternoon, as England was cheered to victory in the World Cup quarter finals, our organising team was hard at work preparing for this FoBP treat.  And ... with music by DixieMix, a wonderfully sunny summer evening and an incredible selection of food in their picnic bags, our audience had the perfect ingredients for a night to remember. As always, our thanks go to everyone who bought a ticket and all who played a part in the organisation !​

​ The Friends' AGM, on April 19th, ended with a terrific talk by
​​Mrs Temple our local cheese hero from Wighton. 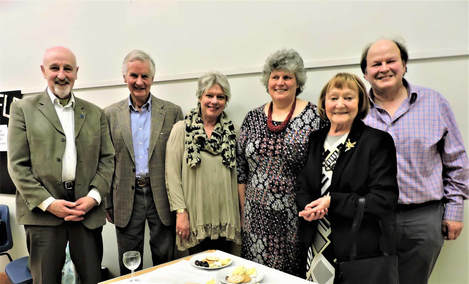 On what was deemed to be the hottest day of the year at that point, with temperatures of about 25 degrees, our AGM and cheese and wine evening drew a good turnout and proved a huge success. Mrs Temple's talk was informative and very funny .... and the generous cheese tasting went down well with the crowd. Some members of the audience are pictured with Mrs Temple (third from right). Again, the FoBP committee wishes to thank everyone who helped to make the event possible from the people who arranged the chairs and put them all back again to Dr Catherine Temple herself and all who donated generous raffle prizes including Adnams of Holt, Whin Hill Norfolk Cider of Wells-Next-Sea and Trilby's, the new cookshop in Feather's Yard, Holt. The proceedings were held in fabulous Binham Memorial Hall.
MARCH

Our 2018 calendar got off to a flying start in March with a sell out talk about famous Arts and Crafts garden designer Gertrude Jekyll.

Guest speaker was Miranda Villiers (right), great-great niece of Gertrude and Goddaughter of Gertrude's great friend, the renowned architect Sir Edwin Lutyens with whom this very talented gardener worked on many outstanding
​Arts and Crafts properties.
​More than 100 people attended the event which was held in Binham Memorial Hall and co-hosted by FoBP and Binham Local History Group.
​The talk, created specially for the evening, gave an insight into the life of a woman to be reckoned with whose determination lead her to great things. She was keen to turn her hand to any number of crafts from painting through to mending her own boots and she ultimately left a very important legacy to the gardening world through her love of colour, gardens and design.
​Miranda also spoke of Gertrude's more humorous side, adding an extra sparkle to the entertaining talk. FoBP and BLHG would like to thank everyone who helped to make the evening possible and all who gave prizes to the raffle including Fakenham Garden Centre ... and Miranda herself who donated Munstead violets. 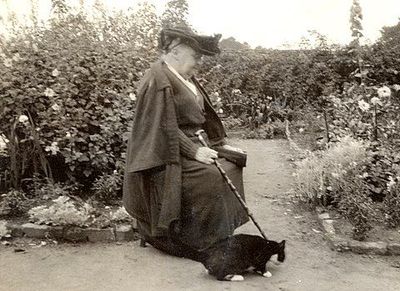 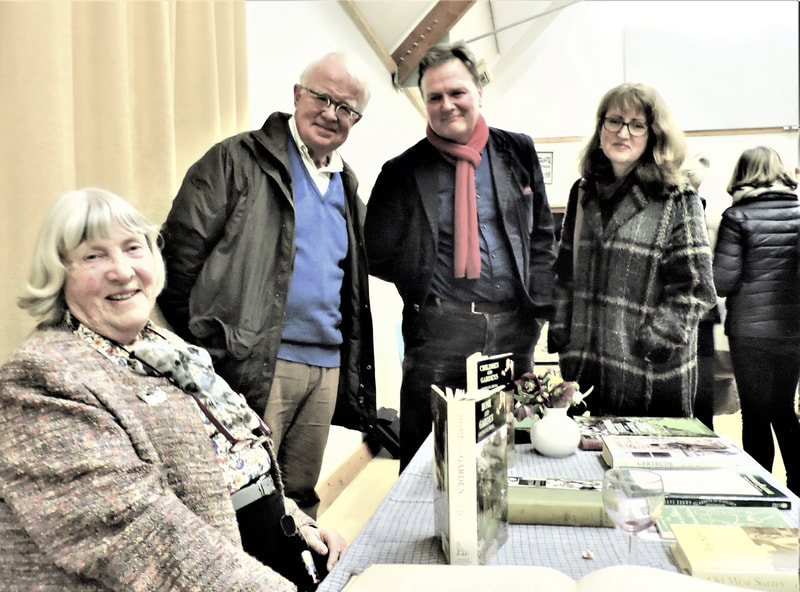 Miranda with members of her audience.
2017

​October 2017: Emma Bridgewater pottery lovers had the thrill of meeting the lady herself at our Autumn fundraiser in the Priory on October 19th. 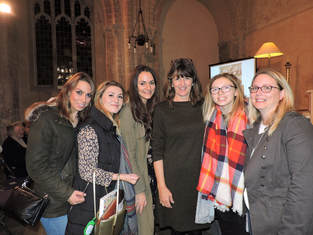 Emma, who has won acclaim for her colourful and very popular tableware, was interviewed about her life and design career by Binham Local History Group secretary, Pennie Alford, and made time to speak to many fans from the audience. She had also donated a Norfolk themed lobster platter which was star prize in the popular raffle on the night.

About 190 people attended the Friends' event, helping to raise money to support the conservation and enhancement of the Priory church. FoBP chairperson, Clive Brady, praised Emma for her kindness and generosity adding: ”We were absolutely delighted with the evening, it was even more successful than we expected.”

Emma has been manufacturing pottery in Stoke on Trent for just over 30 years. She has lifelong ties with North Norfolk and is also president of the Campaign to Protect Rural England. Binham Priory holds a CPRE Norfolk award for the major restoration project on its north aisle in 2009. 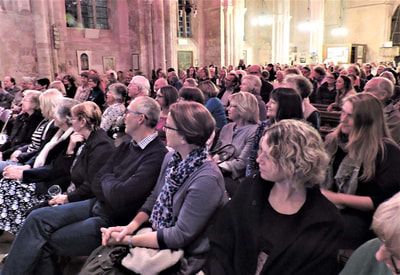 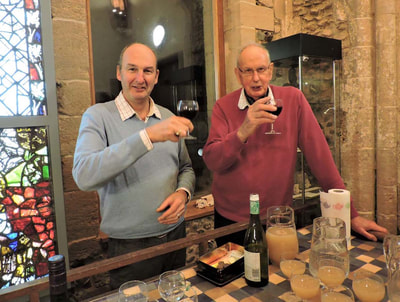 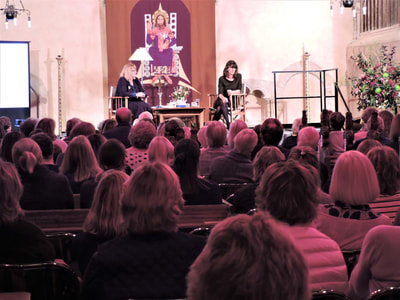 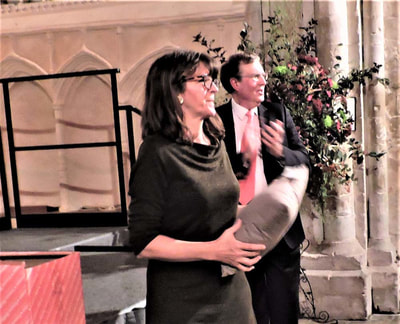 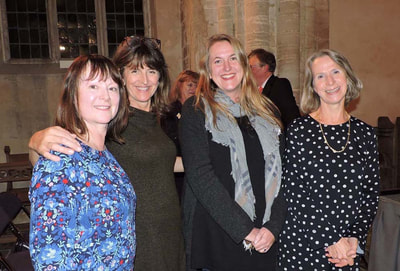 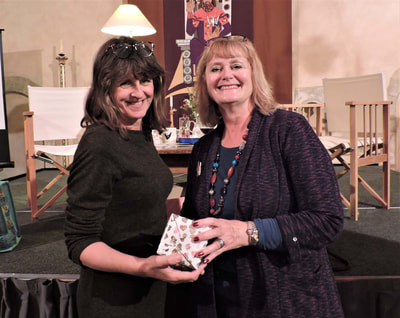 July 2017 : 2017 Picnic2Jazz enjoyed sunshine and a great turnout.
We extend a big thank-you to everyone who attended and all those who
worked to make it such a success ! 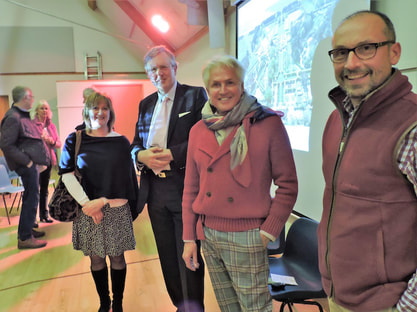 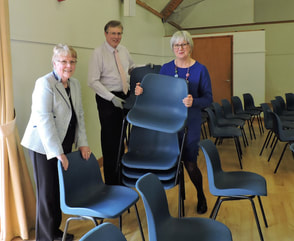 ​Binham Memorial Hall was packed for the sell-out event..... it was all hands to the deck to prepare the hall. Friends' treasurer Hilary Brown (left) helps put out the seating with Chairperson Clive Brady and Mrs Liz Brady.​
​About 100 people attended.